The Primavera, unpredictable as usual 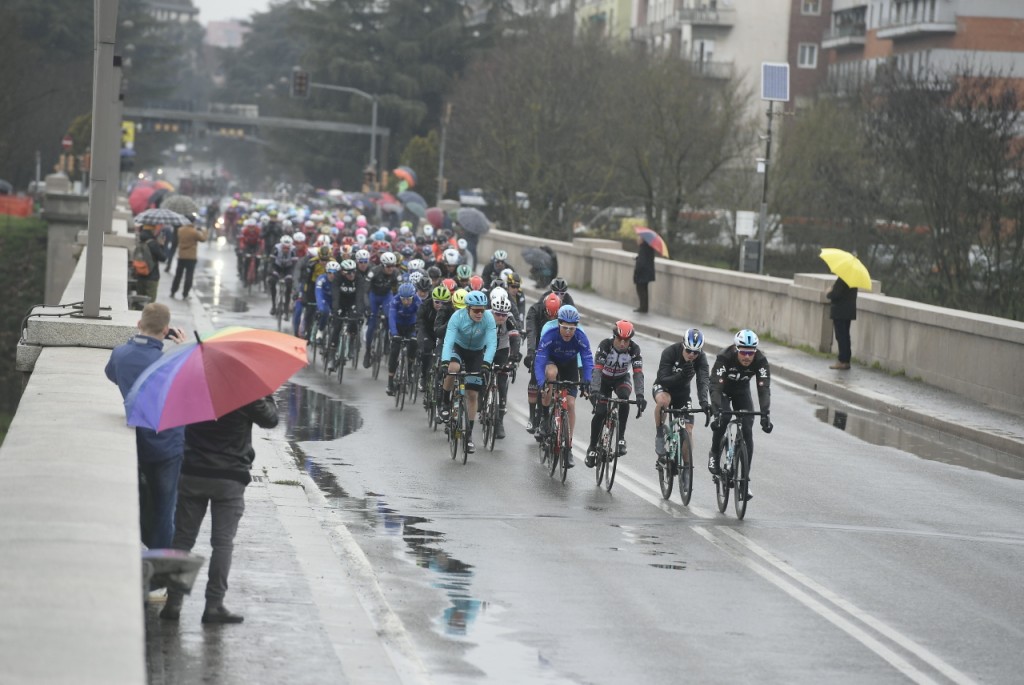 Milano-Sanremo, the first Classic Monument of the season, brought to you by NAMEDSPORT>. The route is almost identical to 2017, covering the Turchino, the Capi, the Cipressa and the Poggio, for a total distance of 294km. There are 25 teams at the start (18 UCI WorldTeams plus seven wildcards), each with seven riders.

COURSE
The Milano-Sanremo, brought to you by NamedSport, follows the classic route that has connected Milan to the Riviera di Ponente for the past 109 years, namely via Pavia, Ovada and Passo del Turchino, before descending towards Genoa Voltri. From here, the route heads west, passing through Varazze, Savona, Albenga, Imperia and San Lorenzo al Mare where after the classic sequence of the “Capi” – Capo Mele, Capo Cervo and Capo Berta – the peloton negotiates two climbs that have become part of the route in recent decades: the Cipressa (1982) and Poggio di Sanremo (1961). The Cipressa is just over 5.6km long with a gradient of 4.1%. The descent leading back down to the SS 1 Aurelia road is highly technical.

FINAL KILOMETRES
The ascent of Poggio di Sanremo starts 9km before the finish line. The climb is 3.7km long with an average gradient of less than 4% and a maximum of 8% in the segment shortly before the crest of the climb. The road is slightly narrower, with four hairpin turns in the first 2km. The descent is extremely technical, on asphalt roads, narrow at points and with a succession of hairpins, twist and turns as far as the junctions with the SS 1 Aurelia. The final part of the descent enters urban Sanremo and the last 2km are on long, straight urban roads. 850m from the finish line there is a left-hand bend on a roundabout. The last bend, leading into the home straight, is 750m from the finish line.

POINTS OF INTEREST
Start – MILANO
Despite its worldwide reputation as the economic capital of Italy, there is more to Milan than just the Piazza Affari stock exchange, its technology and industry. Recognised as one of the European leaders in fashion and design, the city is also a major “exhibition centre”. In 2015, it was the venue of one of the most important events in the world, EXPO, which played host to the official presentation of the 2016 Giro d’Italia.

One may even claim that Milan was Leonardo’s city. The Last Supper, the Atlantic Codex, the Naviglio Grande gates, as well as frescoes, paintings and myriad drawings and designs are a sample of the heritage that Leonardo – an architect, engineer, inventor, scientist and artist – left behind during the 20 years he spent in the city. The church of Santa Maria delle Grazie holds one of the most famous religious artworks of the Renaissance, “The Last Supper”, a mural that Leonardo da Vinci painted between 1495 and 1497, as commissioned by Ludovico Il Moro, Duke of Milan.

Km 30 – PAVIA
Pavia was the capital of the Kingdom of the Lombards, and an important station of the Via Francigena. It is home to one of the oldest Italian universities (founded in the 14th century), and it boasts a rich and remarkable artistic heritage. The Visconti Castle, the Duomo, San Pietro in Ciel d’Oro, Santa Maria del Carmine, San Michele Maggiore, San Teodoro, the Malaspina Picture Gallery, Palazzo Bottigella and the world-famous Ponte Coperto (“covered bridge”) spanning the Ticino River are just a few of the must-see landmarks for tourists. However, a journey through Pavia’s history and culture must not be limited to the old town centre, but should also include the surrounding area, teeming with beauty spots and architectural masterpieces, such as the wonderful Certosa.

Km 77 – TORTONA
Tortona has been a significant strategic centre since Roman times. Located at the boundary between Piedmont and Lombardy, it still serves as a major motorway and railway hub. This town, sitting on the banks of the Scrivia River, has a rich historical past, and has been the setting of wars and battles, including the famous Battle of Marengo, fought on 14th June 1800. It was dominated by warlords including Frederick Barbarossa, Ludovico Il Moro and Napoleon Bonaparte.

The name of Tortona is also entwined with the history of cycling: it was home town to Giovanni Cuniolo, one of the forerunners of this sport, three-time Italian Champion and winner of one edition of “Il Lombardia” (1909), and to Luigi Malabrocca, the “black jersey” of the Giro d’Italia.

Km 138 – CAMPO LIGURE
Lying between the Beigua Regional Natural Park and the Capanne di Marcarolo Natural Park, Campo Ligure sits on the banks of the Stura River. Campo Ligure is featured among the most beautiful villages in Italy (Borghi più belli d’Italia) not only for its natural beauty, but also for its exquisite civil and religious buildings such as the Natività di Maria Vergine parish, the Oratory of Saints Sebastian and Rocco, and the Oratory of Nostra Signora Assunta. Just across the medieval San Michele Bridge spanning the Stura River (a “mandatory passing point” for Milano-Sanremo by NamedSport), which historically served as customs house, lies the ancient San Michele Arcangelo parish church. Other sights include the church of Santa Maria Maddalena and the Filigree Museum; featuring more than 200 artworks from all over the world, it’s definitely worth a visit.

Km 166 – ARENZANO
The face of Arenzano changed after World War II: the ongoing decline in the shipbuilding business led to the redevelopment of the seafront area, where tourism started to bloom, and seaside resorts grew all along the coast, which is now one of the most popular destinations on the western Ligurian Riviera. The promenade has the typical features of the Riviera delle Palme, and is dedicated to Fabrizio De André, Genoese singer and songwriter. In 1911, near Arenzano, Celle Ligure was the birthplace of Giuseppe Olmo, two-time Milano-Sanremo by NamedSport winner – in 1935 and 1938.

Km 242 – LAIGUEGLIA
According to history, the name of the town might be derived from “Aquilia” (eagle), the symbol of the legions of the Roman Empire. The first written evidence, however, dates back to the 12th century, when the fief of Laigueglia swore fealty to the Republic of Genoa. Fishing has always been one of the major activities of this territory, where large numbers of Catalans migrated in the 12th and 13th centuries, and worked mainly in coral harvesting. Laigueglia was often attacked by pirates, and it still holds a historical re-enactment recalling the “Landing of the Saracens” (Sbarco dei Saraceni) in the mid-16th century. Laigueglia is also popular for the early season Trofeo Laigueglia bike race, now in its 54th year.

Km 258 – CAPO BERTA
SCIs – Sites of Community Importance – are defined as “priceless natural heritage areas that must be protected and safeguarded”. Capo Berta is the only “land” SCI of the Imperia district, and the expanded SCI also includes the nearby sea bottom: it’s a typical example of the Ligurian territory, where the sea and the land are closely intertwined, where the hills overlook the sea, and it feels like they want to dive into it. Capo Berta is one of the “historic” Milano-Sanremo by NamedSport climbs.

Km 283 – ARMA DI TAGGIA
From the hills in the up-country – with wide olive groves – to the sea – with beach resorts – the town is basically divided in two: Taggia, a historic centre of Valle Argentina; and Arma, overlooking the Ligurian Sea. This territory has had a long history (allegedly, the first settlements date back to pre-Roman times), and it is strongly linked to its past, customs and rich folklore, with many suggestive historical reconstructions. One of the oldest re-enactments of the whole region is the Festa di San Benedetto Revelli, featuring parades, exhibitions, fireworks, bonfires and music, to commemorate the vow of the Patron Saint in 1925, to protect the town from pillage and tyranny during the Thirty Years’ War. Every year, Arma di Taggia hosts the “Premio Ossi di Seppia”, a national poetry and literature contest dedicated to Eugenio Montale.

Finish – SANREMO
Sanremo is known as the city of flowers and the city of Italian song: every year, Teatro Ariston hosts the famous Festival di Sanremo, currently celebrating its 68th edition. After cycling, automobile racing is the second great sporting tradition of the city with the traditional Rallye Sanremo.

Corso Fiorito (Sanremoinfiore) is another globally famous event taking place in Sanremo: a traditional parade of flower-covered floats welcoming spring with the scent and colours of blossoms that have earned the “Riviera dei Fiori” its worldwide renown.

Sanremo also owes its reputation to its position, to its microclimate and to the beauty of its landscape. All this adds up to a glorious past, which left its lasting mark in the old town centre – nicknamed La Pigna, “the pine cone” after the winding shape of the walls. Included amongst the main sights are the Basilica Collegiata Cattedrale di San Siro, the Sanctuary of Madonna della Costa, the hermitage of San Michele and the Church of Cristo Salvatore, built at the end of the 19th century by the Russian nobility, nowadays one of the symbols of the town, together with the nearby Casino.

Many private mansions built along the promenade shine as jewels of architecture, including the Palazzo Bellevue, which became the city hall in 1963 and has since been a luxury hotel for many years; the Palazzo Borea d’Olmo, a few metres away from Teatro Ariston, one of the major Baroque buildings of western Liguria; and Villa Ormond, renowned for its park, with many exotic plants. Then there’s Villa Nobel, built in Moorish style, the last place where Alfred Nobel lived, currently a venue for cultural meetings; the nearby Art Deco Villa King; and Castello Devachan.

THE RACE IN ITALIAN HISTORY
Milano-Sanremo by NamedSport has been part of Italian popular culture since 1907. It is indelibly linked to some of the great moments in 20th-century Italian history. For example, the 1946 Milano-Sanremo took place the day after King Victor Emmanuel III, compromised by his earlier support of Mussolini to play any part in post-war Italian politics, announced his intention to abdicate. 24 hours later, Fausto Coppi, that giant of Italian sporting history, launched a 150km solo attack that led to victory in the 37th Milano-Sanremo by no less than 14 minutes.

Given the huge period of time before the arrival of the second-placed rider, the radio commentator Niccolò Carosio fell back on a time-honoured broadcaster’s ruse, introduced by this immortal piece of sports commentary: “First across the line, Fausto Coppi. And now, while we wait for the other riders to finish, here is some light music!” In the collective memory, the birth of the modern Italian Republic is intimately associated with Fausto Coppi’s extraordinary performance that day.

LIVE TWEETS
You can follow Milano-Sanremo NamedSport daily with a Twitter feed bringing all the news directly from the race, by following the official Twitter account @Milano_Sanremo. Use the hashtag #MSR to send your comments.