Before the race, Heinrich Haussler (TBV) said, “Over the years, it’s become more of a harder race, more of a puncheur’s race, and less for the sprinters.” Alexander Kristoff (UAD), one of the 7 former  Milano Sanremo winners at the start, agreed: “There hasn’t been a bunch sprint for many years, and I think the level of the puncheurs is really high. They’ve opened a gap on the Poggio and we haven’t manage to get back.”

But this year’s Milano San Remo was decided – or perhaps we should say “undecided” – by an out and out sprinter, for Caleb Ewan’s presence in the final selection complicated  the thought processes of the other favourites, already dimmed after 295 km in the saddle. After the race, Wout Van Aert, third, said, “It was difficult to take the right decision in the end.” 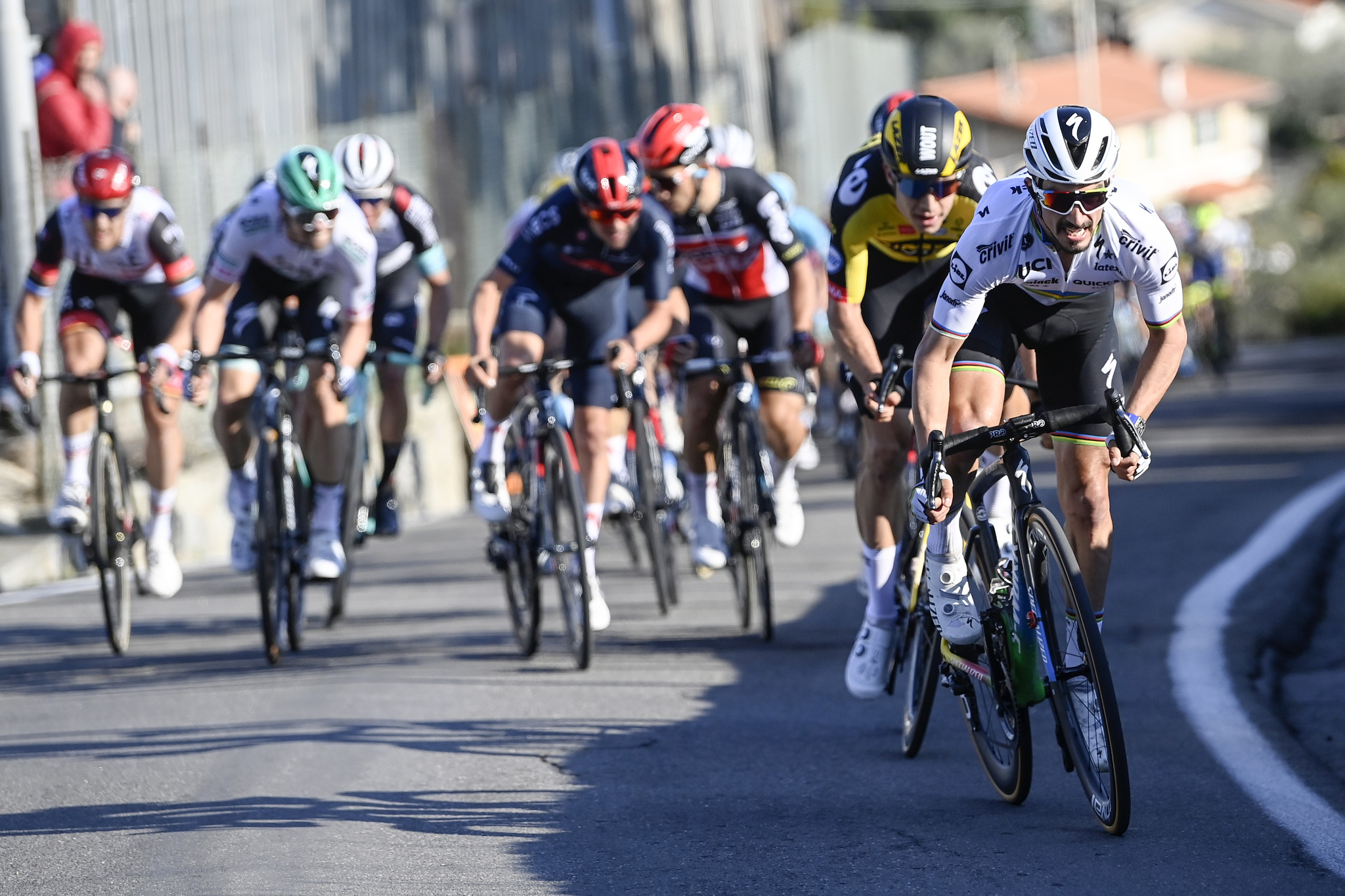 The early breakaway formed in the first kilometres. Three of the eight were in last year’s breakaway: Alessandro Tonelli (BCF), Charles Planet (NTT), who today joined his third breakaway in six Milano Sanremos, and Filippo Tagliani (ANS), who chased and chased, and finally made the group at km 15. The others in the group were Mattia Viel (ANS), Taco Van Der Hoorn (IWG), Mathias Norsgaard (MOV), Andrea Peron (NTT) and Nicola Conci (TFS). Those eight led the peloton by 7’35” at km 30 (269 km to go . The gap stabilised at around 6’20”, with Tim Declercq (DQT), Senne Leysen (AFC) and Paul Martens (TJV) installed at the front of the peloton for much of the day.

The leaders’ average speed of 42.6 kph for the first hour never relented. after four hours, it was 42.75 kph, and from then, it only increased. By the finish, the average, 45.064 kph, made it the third fastest Milano Sanremo of all time. And that, of couse, made for ever more fatigued minds in worn down bodies. 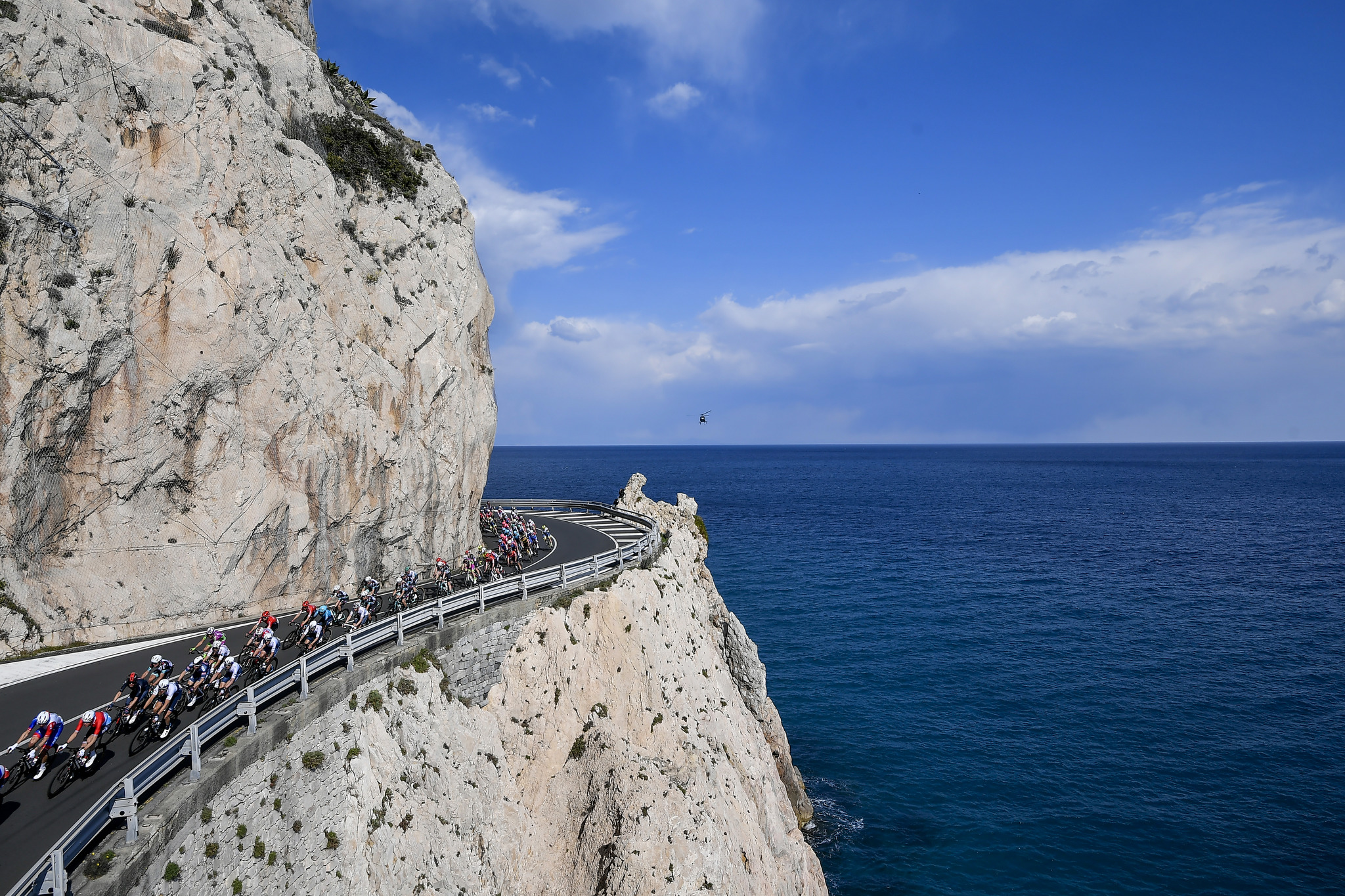 Mattia Viel was the first to drop out of the breakaway, with 60 km remaining. Next was Andrea Peron (NTT), with 52 km remaining. With 28 km to go, Taco Van Der Hoorn (IWG) rode off alone. On the Cipressa, with 24.4 km to go, Sam Oomen and Wout Van Aert led the peloton past Tonelli, then Van Der Hoorne, and it was quickly forgotten that the breakaway had ever taken place.

Alberto Bettiol (EFN) and Fernando Gaviria (UAD) were two of the victims of the pace on the Cipressa. Luke Rowe (IGD) led the peloton on the descent from the Cipressa. Just before the tunnel that precedes the Poggio, his team mate Filippo Ganna replaced him at the front, winning the subsequent drag race with Jasper Asgreen to reach the foot of the Poggio climb first. On the lower slopes Tim Wellens was 2nd, with his team-mate Caleb Ewan 4th. Van Aert rode glued to Alaphilippe’s wheel while, at the other end of the peloton, Elia Viviani (COF) was dropped. 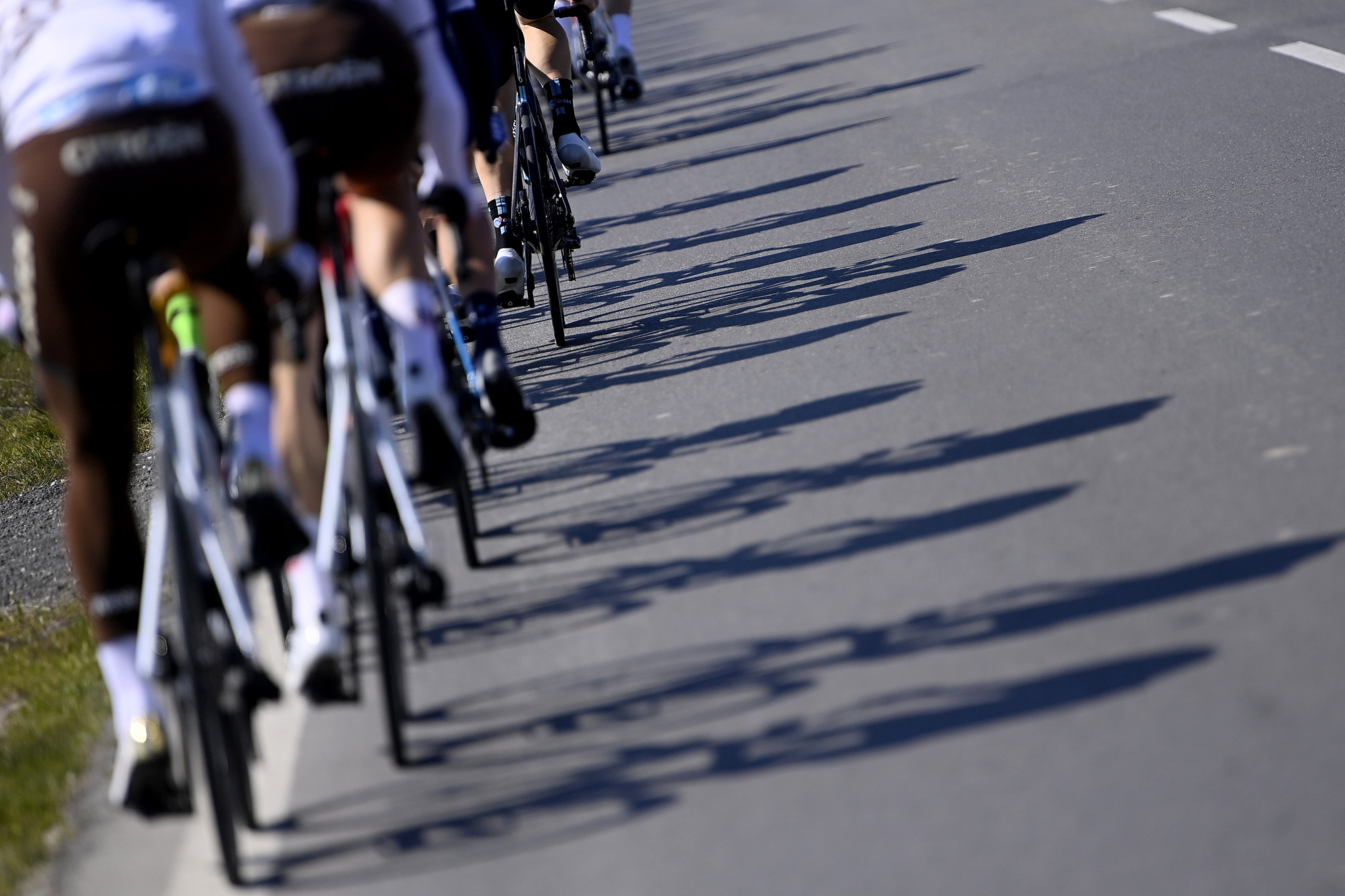 With 6.5 km to go, the inevitable Alaphilippe darted away. Van Aert allowed him not a millimetre’s freedom. Behind them, Démare, Van Der Poel, Schachman and Kwiatkowski were never far away, and the move closed down with Caleb Ewan, incredibly, on Van Aert’s wheel, threatening to make his own acceleration. After the stage, he admitted, ‘I’ve practised that attack on the Poggio many times before this race.” On the descent, inside the final 5 km, Tom Pidcock plummeted down, almost daring the others to stay with him.

A group of about 13 formed at the front. 200m from the foot of the Poggio, while they – meaning Pidcock, Alaphilippe, Van Aert, Caleb Ewan, Van Der Poel, Schachmann, Kragh Andersen, Matthew, Aranburu, Colbrelli, Trentin and the rest – looked around to see who was there and who was not, and wondered what to do about Caleb Ewan, Jasper Stuyven eased passed Alaphilippe… and sprinted.

Then, with 1.5 km to go, Søren Kragh Andersen (DSM) darted away in pursuit. Pidcock went after him, but he had Van Aert on his wheel, so relented. Under the flamme rouge, Kragh Andersen reache Stuyven, visibly weakening now. Their advantage was perhaps 2 seconds, but the chasers were looking back, not forwards.

Around the final left-right chicane, Stuyven led Kragh Andersen, until the Dane found himself stranded at the front. As the chaseres dithered, they added to their lead.

Van Der Poel unleashed his sprint with perhaps 250m to go, but too late: with 100m to go, Stuyven darted past Kragh Andersen, who had nothing left. Ewan and Van Aert swamped Van Der Poel for 2nd and 3rd, but there was no doubt about the winner. 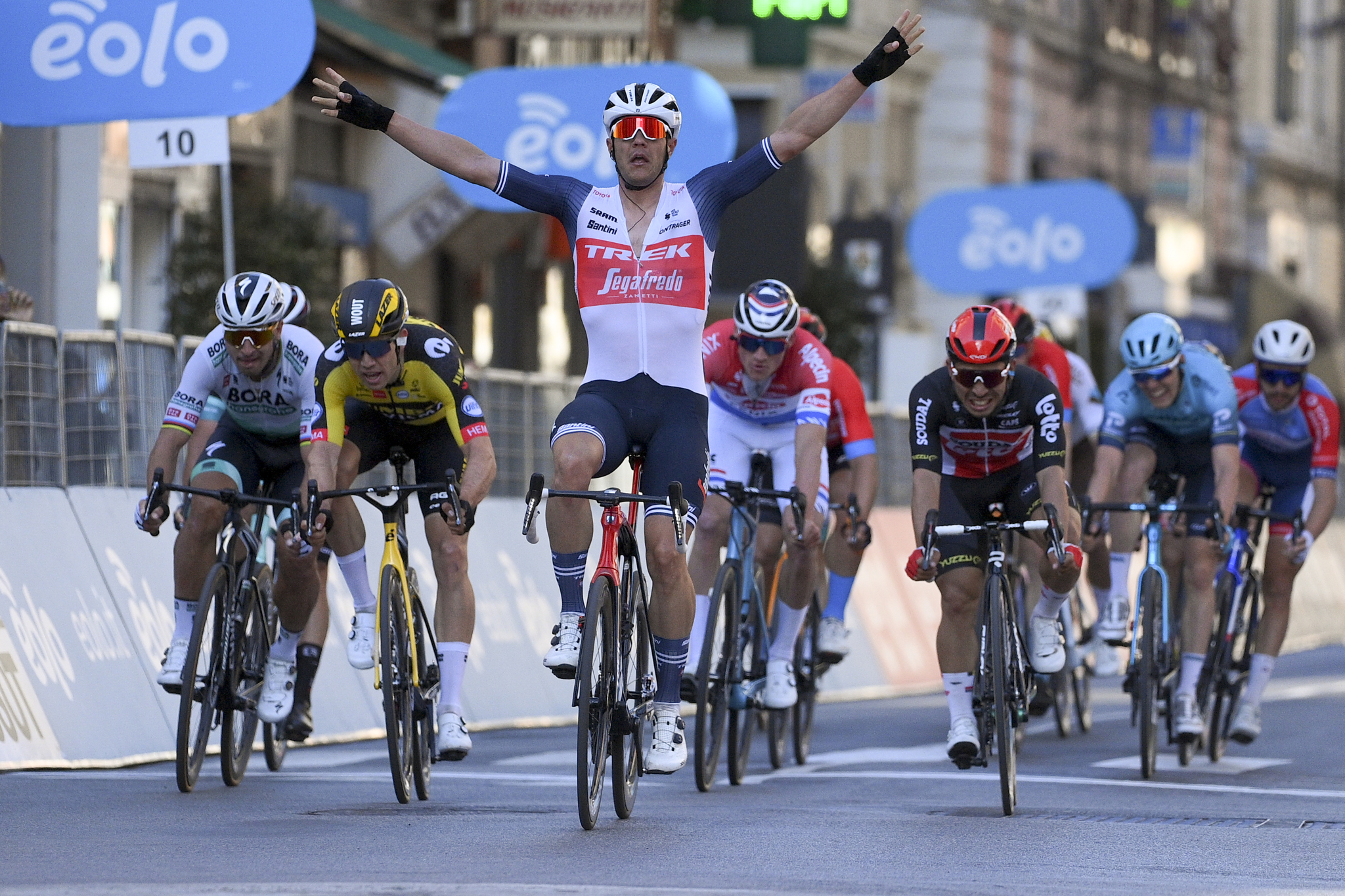 Jasper Stuyven, the 2009 junior world champion, who then won the 2010 junior Paris-Roubaix in the rainbow jersey, has often flattered to deceive. When Mads Pedersen joined Trek-Segafredo, he fell under Stuyven’s spell, but it was the Dane who became the world champion. Sometimes called the champion without a jersey for his attitude, Stuyven today has proven his class with a clever win, all thanks to clarity of mind, despite the fatigue. 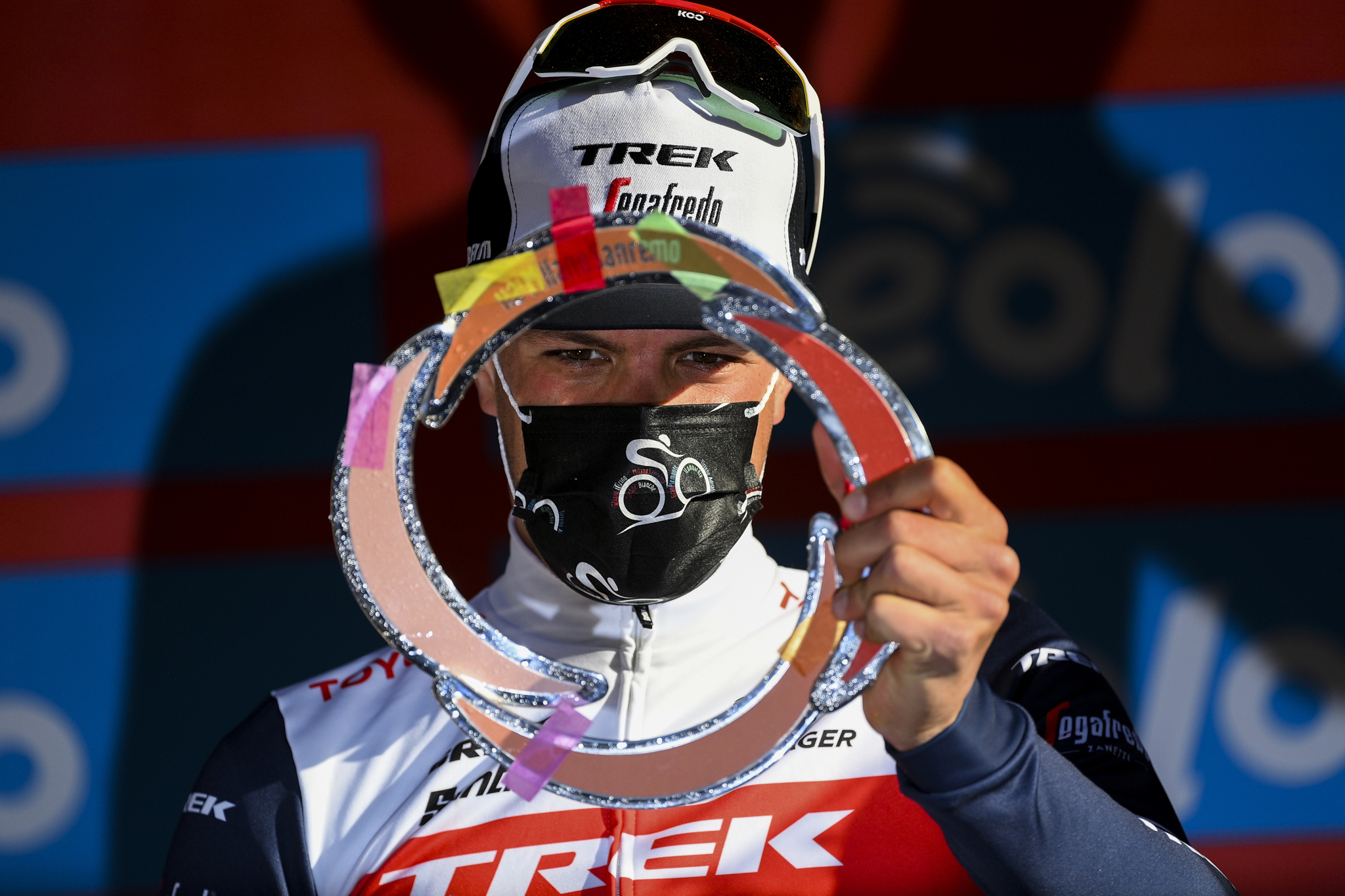