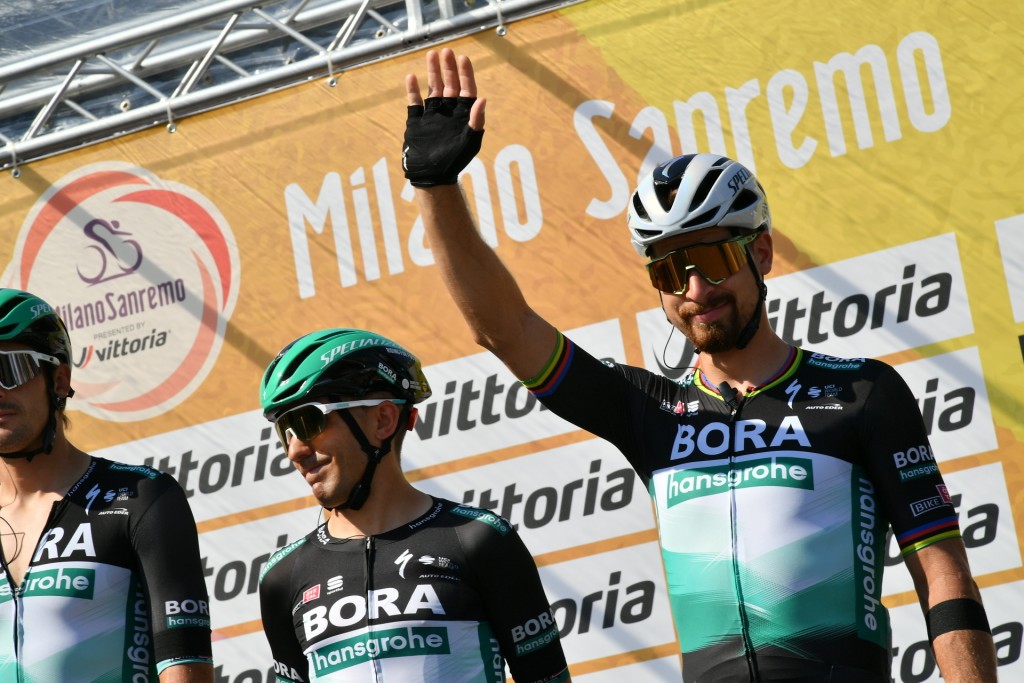 The 111th edition of Milano-Sanremo presented by Vittoria, the first Classic Monument of the season. The riders of the Classicissima will face an unprecedented 305km route that, after the start from Milan, continues towards Lomellina, Alessandria, Monferrato and the Langhe before tackling the climb of Colle Nava, 70km from the finish line in Sanremo. In Imperia the race returns to its classic route to face the Cipressa from San Lorenzo al Mare then soon afterwards the Poggio di Sanremo.

In total 27 teams will cover the 305km from Milan to Sanremo, (19 UCI WorldTeams, 2 qualified by ranking position and 6 wild cards) each comprising six riders.

The list of riders equipped with the Velon data-tracking system In today’s race is available at this link.

After 110 years the Milano-Sanremo presented by Vittoria changes route and meets the sea only in Imperia after crossing the Po Valley and the Apennines further west than usual. After leaving Milan, it crosses the Lomellina on flat, wide and straight roads. After Alessandria, the race crosses the Monferrato and then passes through the Langhe before facing the first long challenge of the day, the ascent of Niella Belbo. The slopes are gentle, but there are, especially in the initial part of the climb, steep sections and the ascent is almost 20km long (average gradient of 3%). After Ceva begins the long and easy ascent to Colle di Nava (3.9km and a gradient of 3% in the final part of the climb), followed by the fast dive on Pieve di Teco, then on to reach Imperia. The ascent and descent are both on wide roads while the crossing of Langhe and Monferrato has narrow sections. In Imperia the race returns to the classic route to tackle the Cipressa (first climbed in 1982) from San Lorenzo al Mare and shortly afterwards, the Poggio di Sanremo (first climbed in 1961).

Despite its worldwide reputation as the economic capital of Italy, there is more to Milan than just the Piazza Affari stock exchange, its technology and industry. Recognised as one of the European leaders in fashion and design, the city is also a major “exhibition centre”. In 2015, it was the venue of one of the most important events in the world, EXPO, which played host to the official presentation of the 2016 Giro d’Italia.

One may even claim that Milan was Leonardo’s city. The Last Supper, the Atlantic Codex, the Naviglio Grande gates, as well as frescoes, paintings and myriad drawings and designs are part of the heritage that Leonardo – an architect, engineer, inventor, scientist and artist – left behind during the 20 years he spent in the city. The church of Santa Maria delle Grazie holds one of the most famous religious artworks of the Renaissance, “The Last Supper”, a mural that Leonardo da Vinci painted between 1495 and 1497, as commissioned by Ludovico Il Moro, Duke of Milan.

Sanremo is known as the city of flowers and the city of Italian song: every year, Teatro Ariston hosts the famous Festival di Sanremo, which celebrated its 70th edition earlier in 2020. After cycling, automobile racing is the second great sporting tradition of the city with the traditional Rallye Sanremo.

Corso Fiorito (Sanremoinfiore) is another globally famous event taking place in Sanremo: a traditional parade of flower-covered floats welcoming spring with the scent and colours of blossoms that have earned the “Riviera dei Fiori” its worldwide renown.

Sanremo also owes its reputation to its position, to its microclimate and to the beauty of its landscape. All this adds up to a glorious past, which left its lasting mark in the old town centre – nicknamed La Pigna, “the pine cone” after the winding shape of the walls. Included amongst the main sights are the Basilica Collegiata Cattedrale di San Siro, the Sanctuary of Madonna della Costa, the hermitage of San Michele and the Church of Cristo Salvatore, built at the end of the 19th century by the Russian nobility, nowadays one of the symbols of the town, together with the nearby Casino.

Many private mansions built along the promenade shine as jewels of architecture, including the Palazzo Bellevue, which became the city hall in 1963 and has since been a luxury hotel for many years; the Palazzo Borea d’Olmo, a few metres away from Teatro Ariston, one of the major Baroque buildings of western Liguria; and Villa Ormond, renowned for its park, with many exotic plants. Then there’s Villa Nobel, built in Moorish style, the last place where Alfred Nobel lived, currently a venue for cultural meetings; the nearby Art Deco Villa King; and Castello Devachan.

THE RACE IN ITALIAN HISTORY

Milano-Sanremo presented by Vittoria has been part of Italian popular culture since 1907. It is indelibly linked to some of the great moments in 20th-century Italian history. For example, the 1946 Milano-Sanremo took place the day after King Victor Emmanuel III, compromised by his earlier support of Mussolini to play any part in post-war Italian politics, announced his intention to abdicate. 24 hours later, Fausto Coppi, that giant of Italian sporting history, launched a 150km solo attack that led to victory in the 37th Milano-Sanremo by no less than 14 minutes.

Given the huge period of time before the arrival of the second-placed rider, the radio commentator Niccolò Carosio fell back on a time-honoured broadcaster’s ruse, introduced by this immortal piece of sports commentary: “First across the line, Fausto Coppi. And now, while we wait for the other riders to finish, here is some light music!” In the collective memory, the birth of the modern Italian Republic is intimately associated with Fausto Coppi’s extraordinary performance that day.